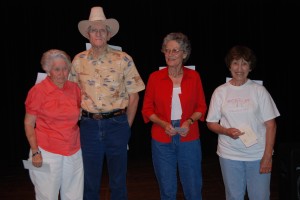 BOB HOLT JIG DANCE COMPETITION – Jig dancing contestants will compete in four age divisions:  Under age 17, age 18-50, age 51-70, and over age 70.  No entry fee will be charged, and contestants can register to participate on the day, or by contacting Paula Speraneo at the West Plains Council on the Arts, info@westplainsarts.org or 417-293-2325.  Over $500 in prizes will be awarded, organizers said.  Cathy Marriott, Ava, Mo., a master artist with the Traditional Arts Apprenticeship Program of the Missouri Folks Arts Program, will be the competition’s emcee.

A copy of the entry form with rules explained is here.

The competition was named in honor of the late Bob Holt, a long-time Ava resident renowned for his old-time fiddle playing for Ozarks square dancers.  He received a National Heritage Award from the National Endowment for the Arts in 1999 for his music and was a master artist with the Traditional Arts Apprenticeship Program in the Missouri Folk Arts Program.

Within the southern folk tradition, there are several styles of solo, freestyle dances, organizers said.  Flatfooting and buckdancing are two of the most common forms.  In the Ozarks, the term “jig” is frequently used to describe this style of dance.

Although these dances are all loosely related, they also are distinctly different.  The word “jig” dates back at least to 1500 AD and is probably somewhat older in usage.  It describes a solo dance that originated in the British Isles where it consisted of repeated hops on one foot while the free foot pointed patterns in the air – heel and toe, front, side or back.

The Ozark jig draws not only from British tradition, but also from American Indian and African cultures.  It basically consists of movement from the hips down while the upper body is held erect, organizers explained.  Emphasis is on leg rather than body movements, and the steps are individualistic and virtually limitless.  The feet serve as a rhythm instrument, and the sound of the shoes striking the floor beats the time of the music.

Even though several jig dancers may take to the floor at the same time, each dancer’s steps are improvised without regard to the movement of the other dancers.  When jig steps are incorporated into square dances, no effort is made to synchronize steps with other dancers in the square, organizers explained.

Another major difference in the British and Ozark versions of the jig is the rhythm of the dance, they added.  In the British Isles, the jig was danced to a lilting 6/8 rhythm.  Ozark dancers prefer extremely fast-paced, driving 2/2 or 2/4 hoedowns.  The Ozark style of jig is a “freestyle” dance form identified with northern Arkansas and southern Missouri.

Each year the Bob Holt Jig Dance Competition is enjoyed by hundreds of spectators and contestants, organizers said.  This year’s event is being sponsored by The Fish Shack in West Plains.

A copy of the Mule Jump 2021 flyer is available here.