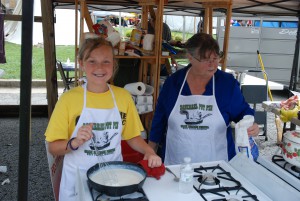 Although you wouldn’t know it from this spring’s chilly weather lately, summer is fast approaching — and with it, hazy days of car washes and lemonade, baseball and barbecue, camping and outdoor festivals. Summer also comes loaded with nostalgia and rushing from event to event with hardly a moment to eat. Thus, the ever-present invitation: “Come on over to my house. I’ve got food!”

The Old-Time Music, Ozark Heritage Festival will be held June 17 and 18 and Judy Harden, coordinator of the festival’s cooking stage, wants to tap into that nostalgia with this year’s theme: “Come on over to my house.” She said she wants to revisit those busy days when that invitation to share a quick meal punctuated many a summer afternoon. The activities take place in the Brush Arbor, set up in the west driveway of the West Plains Civic Center, at East Main and St. Louis streets.

And after all, the point of the festival, now in its 22nd year, is to rekindle those old memories, she said. The cooking stage was established as part of the festival 12 years ago, with Harden taking the role of coordinator in its second year.  “Food probably takes us back quicker than anything,” Harden said.

One 100-year-old recipe in particular is known for taking tasters back to simpler times, and not just by locals. Celeb foodie Anthony Bourdain brought his infamous show “No Reservations” to West Plains in 2010 to sample the squirrel pot pie that later became the cooking stage’s signature dish, a recipe contributed by Pauline Anderson that remains a popular draw for many at the festival. “It’s probably one of those dishes that was derived from, you used what you had,” Harden said.

Each year, squirrel pot pie is served at noon on both days of the festival. Harden said that for the cautious eaters who aren’t sure about committing to a pot pie, squirrel stew is available for smaller taste samples.

The What’s Cookin’ stage sets out to bring together the young, with their inexperience with traditional foods, and the old who want to remember food “the way grandma used to make it.” Recipes are cooked on an outdoor stove with cast iron skillets, traditional bread is made in steps lasting throughout the day, and let’s not forget the handmade traditional donuts. Recipes from the past have included such fare rabbit and groundhog, and Harden added there is a potential for bobcat to be introduced to the mix – more of the foods once consumed because of their availability.

“That’s another thing. We stick to the basics,” Harden said. “Some of the old-time recipes are pretty healthy. They’re the original farm-to-table foods!” She talked about the way people combined whole grains with proteins and ate seasonally in days before health gurus were everywhere touting the benefits of doing so.

Recipes are available to the audience along with the free samples. Harden said she’s heard from many friends over the years who have taken the recipes home and shared the dishes not only with their family, but with friends and neighbors as well.

Last year, she recalled, a young man in his 30s sampled the hog’s head mincemeat and took the recipe home after telling Harden it was “just like Grandma’s.” And that, Harden says, is what the stage is all about – sharing recipes and meals through the generations. “The common thread is, no matter what your heritage is, mealtime is a special time,” she explained.

The cooking stage is looking to feature large-batch recipes with a nostalgic component, made to serve a crowd in keeping with the “Come on over to my house” theme. Anyone who has a recipe to contribute or would like to find a long-lost recipe is invited to call Harden at 256-7988.

The festival’s signature dish, squirrel pot pie, was featured in the Travel Channel’s ‘No Reservations’ episode with Anthony Bourdain.