Attendees at this year’s Old Time Music, Ozark Heritage Festival will be treated to a great schedule of musical workshops during the two-day event.  Artists who know the value of passing along the knowledge and joy of traditional music will share their talents with all who want to participate.   Workshops will be held inside the Civic Center. 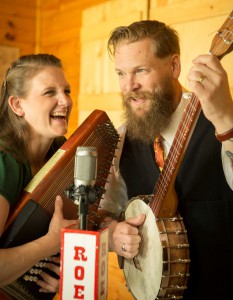 Featuring banjo, Autoharp, guitar, and Appalachian clogging, the band and family of fans have been regularly filling Minneapolis’ 331 Club every Monday night since 2005. They’ve shared the stage with Doc Watson, Ralph Stanley, Mike Seeger, Del McCoury, the Grascals, and Jim Kweskin & Geoff Muldaur. In 2011 the band was awarded the prestigious McKnight Fellowship for Performing Musicians; they won the title of “World’s Best Jug Band” twice, in 2010 & 2012 at the annual Battle of the Jug Bands; in 2012, won the Minnesota Duet Contest at the MN State Fair; and in 2016 won the title of Entertainers of the Year from BMAI.

The Roe Family Singers mix original music and contemporary takes on old-time, traditional, and gospel tunes into one roiling & rollicking river of fresh yet familiar American music. Every performance raises a ruckus.

One of the foremost Missouri old-time fiddlers playing today, John Williams has played the fiddle for over 20 years. He first caught the “fiddle bug” at age seven inspired by the “fiddling I heard growing up at the local fiddle contests my family would take me to.” He grew up and still lives in northeast Missouri on his family’s farm located in rural Monroe County. Central and northeast Missouri is home to the distinctive regional old time fiddle style known as Little Dixie; generally characterized by long bow strokes, an emphasis on clear notes and melodies, frequent double stops, and accenting all of which produce a driving quality to the tunes.

From ages 9-17, John attended Bethel Fiddle Camp held annually in Bethel, MO and learned from “some of the finest Missouri fiddlers to ever draw a bow;” Pete McMahan, Taylor McBaine, Johnny Bruce, Vesta Johnson, Dwight Lamb, Charlie Walden and Bob Holt to name only a few. In 1998, then sixteen, he had “a once in lifetime opportunity” to apprentice with the legendary Little Dixie and contest fiddler Pete McMahan in Missouri’s Traditional Apprenticeship Program. Pete was and is a significant influence on John. John learned Pete’s amazing bowing technique and many of his rare and unique tunes. Since then, like all great fiddlers, John has developed his own style and picked up many more tunes through the years.

While still a teenager, John started to seriously compete and win fiddle contests in Missouri and beyond.  In 2001, at age 20, he won the National Invitational Fiddle Championship held in Yankton, South Dakota. Now in his 30’s, John plays Missouri fiddle contests occasionally for fun and a chance to jam with old friends. Like other old time musicians, he worries that the popularity of national Texas contest style of fiddling is overtaking Missouri’s historically rooted regional styles. Today, you just as  likely to find John playing at jam, house music gatherings, or at a dance often with his good friend and frequent back-up guitarist, Kenny Applebee.

John teaches regularly as a master fiddler at the same Bethel Fiddle Camp he once attended. He has been selected twice as a master artist in Missouri’s Traditional Arts Apprenticeship Program, one of the youngest masters chosen in the programs 32-year old history.

As John simply and directly puts it, “I want to play and pass on the traditional tunes that have been played in our state for generations.”

His current apprentice is Jessie Perrigo of Mexico, MO.  Jessie is the granddaughter Norma and backup guitarist Kenny Applebee. Growing up she traveled with her grandparents “far and wide to fiddle contests, jams, dances and music gatherings at my grandparents’ home. My grandfather taught me my first two tunes on the fiddle at age 5.” Jessie also attended Bethel Fiddle Camp. After high school, she played only occasionally. Instead she worked and attended college fulltime, got married, and landed her first full time teaching position in the Williamsburg school district. Nowadays, Jessie has returned to playing the music she loves.  As a teacher, she brings her grandfather to her 4th grade class, because she wants her students to know “that right here in mid-Missouri we have music that is homegrown and unique to this area.”

Kenny Applebee has lived all his life in rural Audrain County near Mexico, MO.  For over 50 years, he has played old-time rhythm guitar at festivals, contests, dances fiddler conventions, and jams in Missouri, Iowa, Nebraska and Arkansas. When coming up, he heard the older backup musicians of the day. Over time, he developed his own style of playing. During the hay day of Missouri old-time fiddle contests; he emerged as one of the most sought after back up players around. Kenny is known for his “walking chords,” impeccable rhythm, clear notes and distinctive bass runs that make him the guitarist of choice for fiddlers, past and present. For years, he was late fiddler Pete McMahan’s preferred and highly treasured guitarist. Pete was a man extremely particular about his backup musicians. The two developed a partnership and close bond, memories Kenny treasures.

Kenny still enjoys playing backup and fiddle contests but like John is selective, playing at contests whose organizers still operate under old time contest regulations. He picked up playing the fiddle over 20 years ago and these days he enjoys competing in the senior fiddle division.

Talk to Kenny about back up guitar playing today, he has a saying: “There are many guitar players out there, but only a few who can really play.” He has clear opinions about what constitutes good backup playing. It also reflects his concern, also echoed by fiddlers, about the current lack of skilled backup musicians. When asked who plays for him at contests he stated, “I look for the best guitar player I can find that day” adding wryly “and sometimes the best ain’t very good.”

Kenny has taught and played at Bethel Fiddle Camp since its inception and watched John Williams grow up and develop as a fiddler.  This year, Kenny is a first-time master artist in TAAP, teaching back-up guitar to apprentice Brad Roby of Columbia, MO.  Brad is an experienced guitarist, long active in mid-Missouri old time jams. Years ago, Brad learned a very different style of backup, known as “sock style” from the late mid-Missouri swing guitarist Ivan Crane. Two years ago, Brad, after attending a performance of Little Dixie fiddle music by John and Kenny at the University of Missouri, was inspired to ask Kenny to teach him.  Brad explained, “I don’t play in a straight old time style and I want to learn Kenny’s particular style of playing in detail and teach others in the future.” 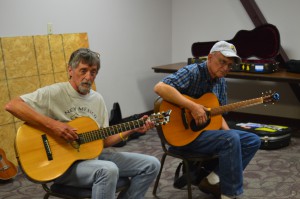 Music and photography have been passions of Dennis since early childhood and his interest in the two has never waned. In fact, he is busier now than ever with both endeavors. He remembers loving the sound of Les Paul and Mary Ford even before he started kindergarten in his home town of Wichita, Kansas. A few years later he gained appreciation of the finger style techniques of Merle Travis and Chet Atkins and around age 12 he began thumping on a banjo ukulele and a hard-to-play Stella acoustic guitar.

Old-time music has been a family tradition for generations for Colbert Brothers Leon, Van, Vernon and John, all of whom hail from Willow Springs, Mo.  “Mom and Dad instilled in us the love of their music, and to this day we play, sing and remember,” said Van, who is known for his unique “two-finger” roll style on banjo.

The Colbert’s grandfather, Hall Colbert, moved the family from the Buffalo River region of Arkansas during the Depression years.  He and his wife, Ethel, their four boys, Leon, Bob, Truett and John, and their four daughters, Geneva, Gladys, Jewell and Marge, traveled by horse and wagon to the Howell County community of Amy where they established new roots and Hall preached as a Baptist minister and sang.

The Colbert’s father, Joseph Truett, who was named for a famous turn-of-the-century minister, taught himself to play a banjo he built by stretching a groundhog skin over the hoop for a head.  He taught Van’s older brothers to chord the guitar and enjoyed playing along once they could carry a tune.  Mother Vernieca May (Easley) Colbert also was a beautiful singer and lady, Van said, and before she passed away, they could always encourage her to sing “Beautiful Brown Eyes,” “Red River Valley,” “Maple on the Hill” and “Wildwood Flower” to their accompaniment.