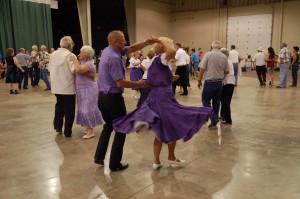 Traditional square dancing will again be featured at this year’s Old Time Music, Ozark Heritage Festival in downtown West Plains, Mo. Square dancing will take place both evenings from 5-8 p.m. in the Civic Center Exhibit Hall. Bring your dancing shoes and join in!

The two-day annual event in downtown West Plains, Mo., celebrates Ozarks music and culture.  Admission to all festival events is free. Festival hours are 10 a.m. – 9 p.m. both Friday and Saturday, June 3 and 4.

Traditional square dancing has been an integral component of the Old-Time Music, Ozark Heritage Festival since the first event in 1995.  Fiddler Bob Holt and caller Edna Mae Davis of Ava introduced this art form that year, and their influence continues to be felt.

Square dancing has been an important vehicle for both artistic expression and social recreation in this region since the arrival of the first white settlers.  It is closely associated with traditions of fiddling and string band music, as well as traditions of solo dancing such as jig dancing.

Square dancers in the Douglas County, Mo., area, especially Ava, maintain a distinctive tradition of square dance characterized by brisk tempos, the incorporation of solo jig dancing into square dances during transitional segments, and the participation of the callers as dancers. 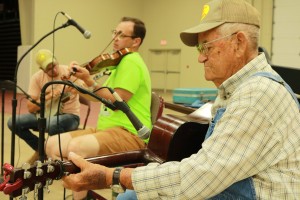 Experienced string band musicians from south-central and southwest Missouri who are thoroughly familiar with regional square dance traditions, led by fiddlers David Scrivner and Ashley Hull Forrest, banjo player Nathan McAlister and guitar player Joel Hinds, provide live musical accompaniment for the dancing.    Ashley Hull Forrest has been playing the fiddle since she was 6 years old and loves to play old-time fiddle music any chance she gets. A wife and mom to two girls, Ashley works as a school nurse for a local school district.

David Scrivner began playing Ozarks music when he was just six years old. A native of Mansfield, Missouri, David’s family ties in the Ozarks go back generations with roots in Douglas and Taney counties. David has been playing traditional Ozarks fiddle music for 25 years, including several years as a student and apprentice of renown Ozarks fiddler Bob Holt. Focused on preserving Ozarks dance and music traditions, David also won the 2019 Arkansas State Old-Time Fiddling Grand Championship. He has his master’s degree in English and is currently employed in the marketing field in Springfield.

Joel Hinds began playing guitar and banjo when he was eight years old. In 2015, Joel was an apprentice in the Missouri Folk Arts Program, learning old-time fiddle under Howell County fiddler Cliff Bryan.  A sixth-generation native of Howell County, Joel lives on the family farm with his wife Casey and their six children. Joel works as headmaster of a Christian school in Willow Springs.