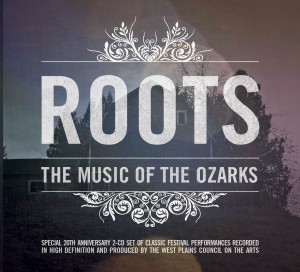 “ROOTS-the Music of the Ozarks”, a special 20th Anniversary 2-CD set of classic Festival performances mastered in high definition and produced by the West Plains Council on the Arts.  This CD was compiled from live recordings made at the 2003 Old Time Music, Ozark Heritage Festival, West Plains, Mo.

This CD can be ordered by mail for $20 plus $5 shipping and handling from West Plains Council on the Arts, P.O. Box 339, West Plains, MO 65775 OR payment via PayPal may be sent to info@westplainsarts.org (see order form)

All proceeds from the sale of this CD benefit the West Plains Council on the Arts’ endeavors to promote arts activities in the West Plains area, including the Old Time Music, Ozark Heritage Festival.

The Old Time Music Ozark Heritage Festival has been presenting the traditional heritage of the Ozark Highlands since 1994. The festival strives to present a picture of the Ozarks through the music of the region. More than a recreation of the past, we present those portions of the Ozarks’ musical heritage that can be classified as “old-time” and present other performers who have influenced the tradition of old time music in the region. Some of the folks are from nearby, some from far away. Some of the performances are more traditional than others. Altogether, our music remains one of our most enduring traditions, and it is our pleasure to share it with you. This CD was compiled from live recordings made at the 2003 Old Time Music Ozark Heritage Festival, West Plains, Mo.

Keith (guitar), Nicki (bass) and Jessica (fiddle) Collins make up this family band from Pomona, MO. Jessica had been playing mandolin since age 9, but when she attended her first old time music festival in 1996, her tastes changed and she took up the fiddle. She apprenticed through The Missouri Folk Arts traditional arts program with local fiddler Cliff Bryant and others, be-coming a staple in the dances and picking circles in the area. The family is accompanied on banjo by Van Colbert of the Colbert Brothers Family Band of Willow Springs, Mo.

From Lebanon, Mo., they play a rare style of folk music that was common in the 1800s and 1900s. The late Don Graves is featured on dulcimer (also known as dellsmore or Indian walking cane). His great grandfather returned from the Civil War playing the instrument with a hardwood stick and turkey quill. The family carries on that tradition. He is accompanied by his sisters, Daisy Dame (guitar) and Vivian Owens (bass). They played throughout the country with their father, Bill Graves, for more than 50 years. Don passed shortly before this album was released.

Leela and Ellie Grace are the living proof that when it comes to family bands that continue playing through the generations, the acorn doesn’t fall far from the tree. Veteran performers from childhood with their parents, Paul and Wynn Grace, they are as apt as not to break into a spirited dance in the middle of their songmaking. They accompany themselves with a mix of banjo, mandolin and guitar.

To Kim and the late Jim Lansford, the appeal of traditional music has always been its power to evoke place and time through the voice and visions of people expressing the circumstances of their own lives. Unlike some, The Lansfords always preferred to view the musical tradition not as a collection of voices who have had their say, but who continue to speak. Jim was one of the finest traditional musicians, whether on fiddle, banjo, mandolin or guitar, to walk these hills. Kim, with her fine hand at guitar and clear, rich voice, sings on alone.

Judy is an enthusiastic and knowledgeable performer of traditional folk music, as well as a fine auctioneer. Her voice is strong and clear, and her guitar accompaniment solid and confident. She grew up in Rogersville MO, where she fell in love with folk songs and the rich and varied stories they contained. She is equally at home with songs of the Ozarks as with those of traditional Americana and the music of the British Isles.

With Wayne Anderson, Warren Moody, Fallis and Carolyn Frazier, Bethany and Andy Penrod. Carol, a lifelong resident of Souder, Mo., began singing as a child in the one room schoolhouse near her home. Her grandmother, Verna Gardner, a singer and songwriter, inspired her and gave her an appreciation of the stories and the life ways of the past. She learned songs from her father and grandfather, and learned to play guitar from area musicians.

Ken Wagoner (guitar and mandolin), Dennis Crider (guitar) Rick Cochran (guitar) and Marideth Sisco (vocals) are the Rounders, all of whom call West Plains home. Crider and Sisco are retired journalists, Cochran a retired biologist, and Wagoner a practicing attorney. Sisco is well versed in the culture of the Ozarks and a long-time student of the Ozarks ballad. The group offers an interesting take on the music of the region, incorporating a hint of jazz, a touch of folk revival and a fair amount of pure tradition.