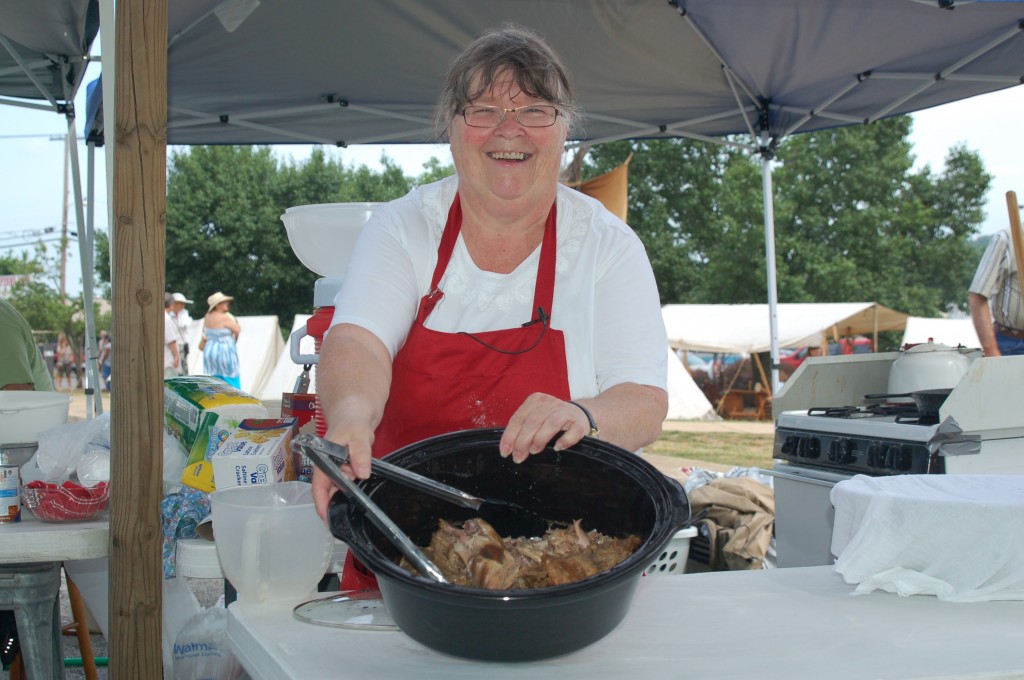 Judy Harden of West Plains loves to cook and for the past 11 years has been in charge of the “What’s Cookin’” Stage at the Old Time Music, Ozark Heritage Festival.  “Remember When” will be the theme for this year.  The activities take place in the Brush Arbor, set up in the west driveway of the West Plains Civic Center, at East Main and St. Louis streets.  Memories revolving around old-time recipes and all the preparation of favorite dishes will be brought to life at this year’s event.  We want to invite all festival attendees to stop by the stage for a nostalgic look back as we help them “remember when.”

Volunteer presenters young and old help with the demonstration, which involves sharing a recipe (and usually a story) from their family’s past. The success of the Cooking Stage is attributed to our area heritage and the handing down of family favorites.  Since a lot of recipes and cooking techniques come to us by word of mouth, we encourage sharing the stories and recipes, and demonstrating the “how to” in order to preserve them.

One of the featured recipes this year is “Wash Day Bread,” which Harden said dates back to when washing clothes was an all-day event, so the meals consisted of a simple bread served with gravy.  “The stories I’ve heard say that bread always tasted so good after a long day of washing,” she said.

Another recipe will be hogshead mincemeat, which Harden describes as “mincemeat extraordinaire, nothing like what comes in a jar.”

Classic demonstrations such as bread-making, roll-making, and doughnut-making will return, as well as the festival staple, squirrel pot pie.  “As long as someone provides the squirrels, we’ll always have it,” Harden said.

In honor of the festival’s headlining musical act, The Quebe Sisters Band of Fort Worth, Texas, Harden said there might be a few Texas dishes.

Area cooks who are willing to share a recipe should call the Cooking Stage coordinator, Judy Harden, at 417-256-7988.

The free samples of the food prepared are always a draw for festival attendees and volunteers.  Come to the festival, attending the cooking stage, and leave feeling like you have visited days gone by.

The festival’s signature dish, squirrel pot pie, was featured in the Travel Channel’s ‘No Reservations’ episode with Anthony Bourdain.