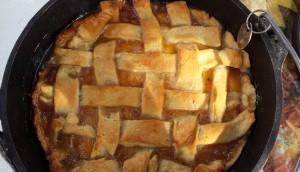 ON THE COOKING STAGE

Old-time cooking – the stories, recipes, and dishes will be featured at this year’s What’s Cookin’ Stage at the Old-Time Music, Ozark Heritage Festival, along with a healthy dose of Dutch Oven cooking. The 24th annual Festival will be held June 1 and 2, 2018, in historic downtown West Plains, including in and around the West Plains Civic Center. The two-day annual event in downtown West Plains, Mo., celebrates Ozarks music and culture.  Admission to all festival events is free. Festival hours are 3-9 p.m. Friday, and noon-9 p.m. Saturday.

In the Brush Arbor, neighbors will share stories from their families, highlighting the way food was prepared in their homes here in the Ozarks. Dutch Oven cooking will be featured both days.  Friday Coordinator Allison Wilson starts the menu off with BBQ ribs and cherry cobbler. Completing the day’s offerings will be venison chili.

Saturday’s session will kick off with the 1st Annual Pie Competition. Pies of any sort are welcome, and entries will be received from 10:30 to 11:30 a.m. Saturday. Entries should be brought to the Redbud Room inside the West Plains Civic Center. Judging by a select group of experts begins at noon, with awards announced (and samples offered at the Cooking Stage) at 12:30.

Pies should be prepared “from scratch,” including crusts, as that will be included in the judging criteria. Please bring a copy of your recipe so it can be shared in next year’s Festival Cookbook. Winners will also be featured in the Cookbook. Pies should be brought in non-returnable tins. 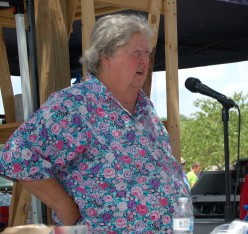 Following the pie competition, Allison Wilson will prepare her squirrel and dumplings, accompanied by storyteller Marideth Sisco. BBQ ribs and blackberry cobbler take the stage after that, followed by venison chili.